The hills are alive with the sound of.. Tokis! Tokis you say? If you are wondering what Tokis are, then let us tell you as we also just found out.bTokis are little Japanese monster characters which you’ll quickly grow to be very fond of when playing this casino slot.

It may strike you oddly, that you are indeed playing a casino games with more a child’s theme, but that’s what’s quite nice about it – it’s different from the rest which of late have been about space and cosmic adventures - and soon you’ll just grow to love the Tokis and what they represent. Cash winnings.

Toki Time Slot has 11 pay-lines but what’s a nice touch to this set up is the pay lines pay in both directions, so you could also consider it to be a 22 pay-line game instead.

Toki Time is a simple game so don’t expect to see many features on it but what it lack in features makes up in cute-ability and pay out (a whopping 97.1% theoretical pay out!) The base symbols that come with the lovable monsters pay up to 2,400 coins if you’re betting at the maximum settings.

In addition to these monsters, there are also Expanding Wilds in the form of taller monsters that are a mixture of sheep, giraffe, unicorn and some other random creature animals we’re not super sure of what they are. These appear on reels 2 and 4 only and every time you land on then, you get unlimited number of re-spins until there is no more wins to take. Prize wins during this feature can get quite high to that definitely adds a nice thrill to game play.

2 Way Wins: All pay lines are active 2 ways which adds a bit of a wow factor. They pay in this slot from left to right and right to left. 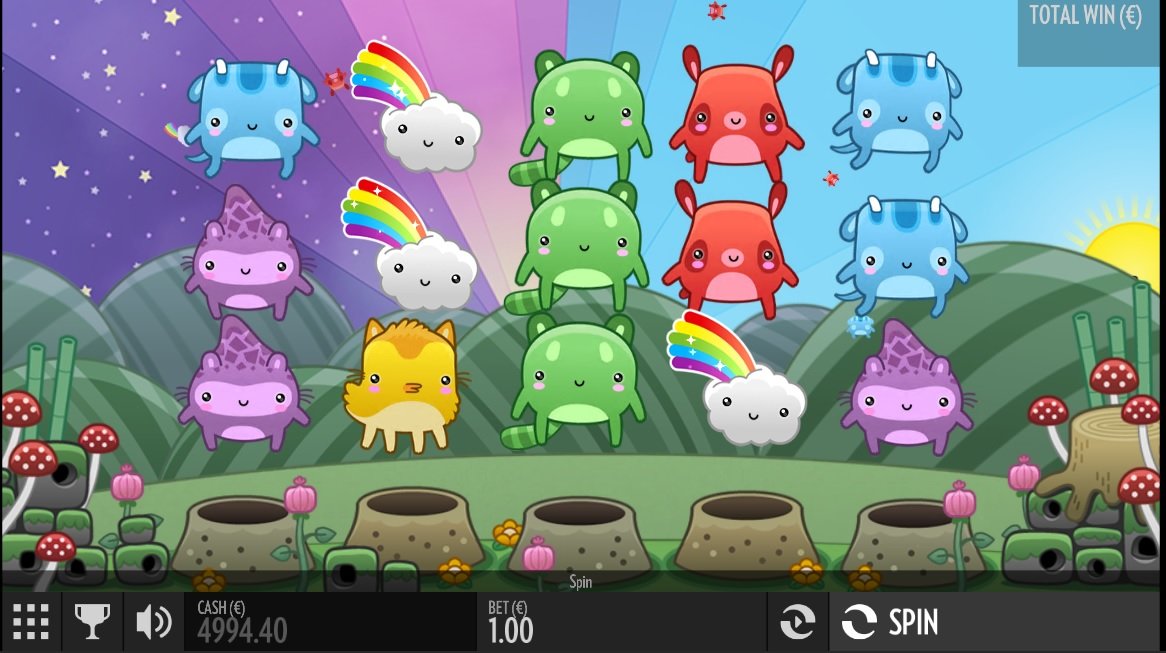 Toki Time is a stylish game that is one of our favourites from Thunderkick Slots. You’ll love the Tokis which are incredibly cute to the point you’ll be wishing one little furry friends will be helping its way to making you a fortune!

Or.. that you could take one home. Also, another point about Toki Time, which is rather nice too is that the theoretical return to player on Toki Time is a whopping 97.1%, which is quite a lot if you compare to other Thunderkick slots and more over – other new Netent Slots and Microgaming.